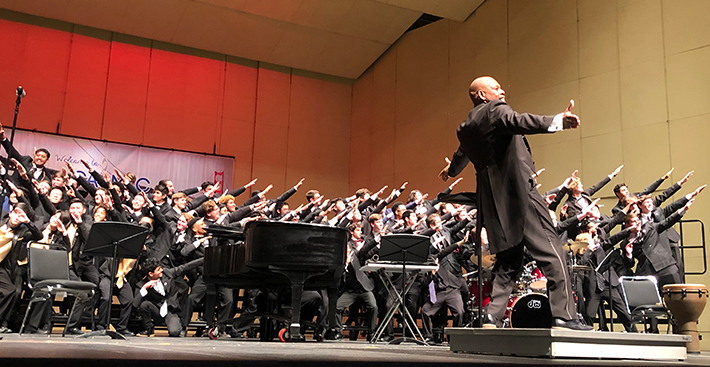 Resounding Achord Productions is pleased to contribute to the scholarship fund for the CCDA All-State Honor Choir. Beginning with the 2021 Virtual All-State, the application process will be run entirely by CCDA.

For more information about the honor choirs, please visit http://calcda.org/calendar-of-events/honor-choirs/

In September of 2013, we heard from a friend that a number of high school students who were accepted into the ACDA Regional Honor Choir Program could not afford the $100 fee, and the school that they attended did not have the funds to assist them. We remember how impactful these programs were when we were in high school and decided to find a way to help. That year Resounding Achord found the funds to offer eight scholarships to students who could not afford to pay the participation fee.

We have continued to expand this program over the years, and Resounding Achord Productions is now pleased to be able to offer 50  scholarships for the CCDA Coastal and Central Region Honor Choirs.

We require that each student-teacher pair fill out an application that provides justification for the need of the scholarship. The application deadline is usually mid-October.

Note: due to the COVID-19 pandemic, the CCDA Regional Honor Choirs have been canceled for 2020.

We look forward to supporting students in the 2021 Virtual All-State, and we will resume our Regional Honor Choir Scholarship Program in Fall 2021.

For more information send email to our artistic director.

History of the Program

This concert was a celebration and fundraiser for St. Francis Episcopal Church in honor of their new virtual organ and renovated sanctuary. Resounding Achord was honored to hold the first public concert in the new space. Kim Andre Arnesen’s Magnificat offered the opportunity for a wonderful collaboration between organist, soprano soloist, and choir. Click here for details about this performance. 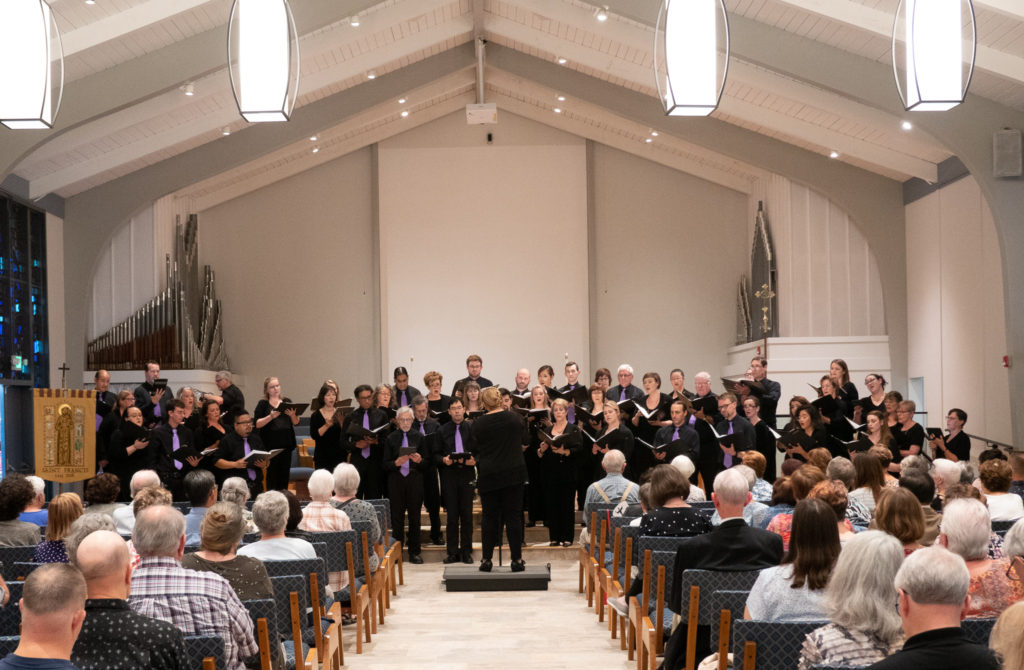 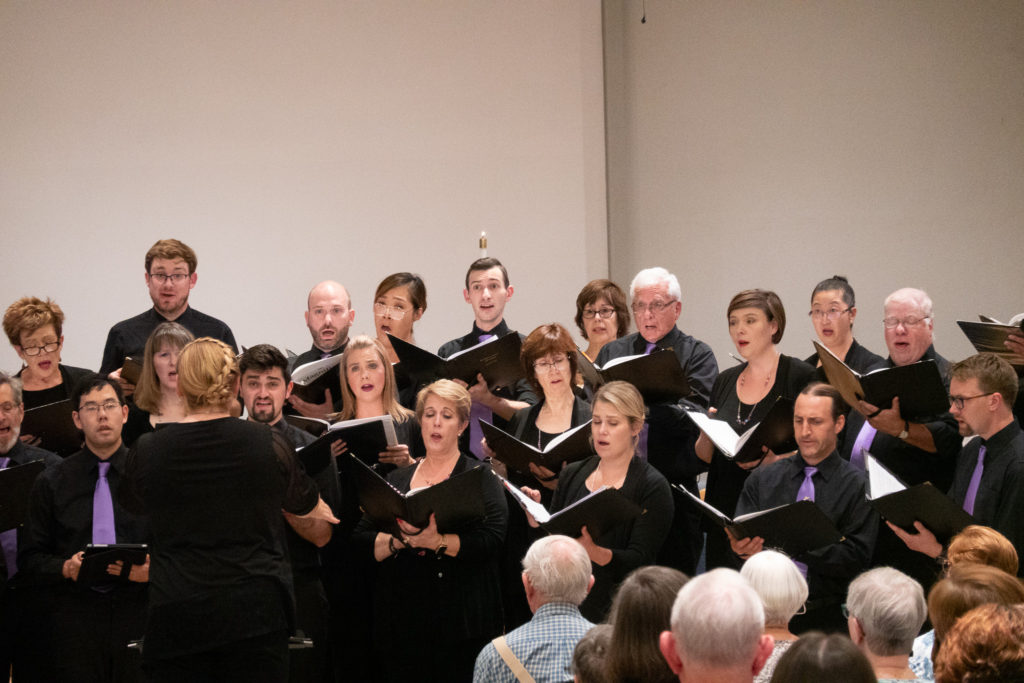 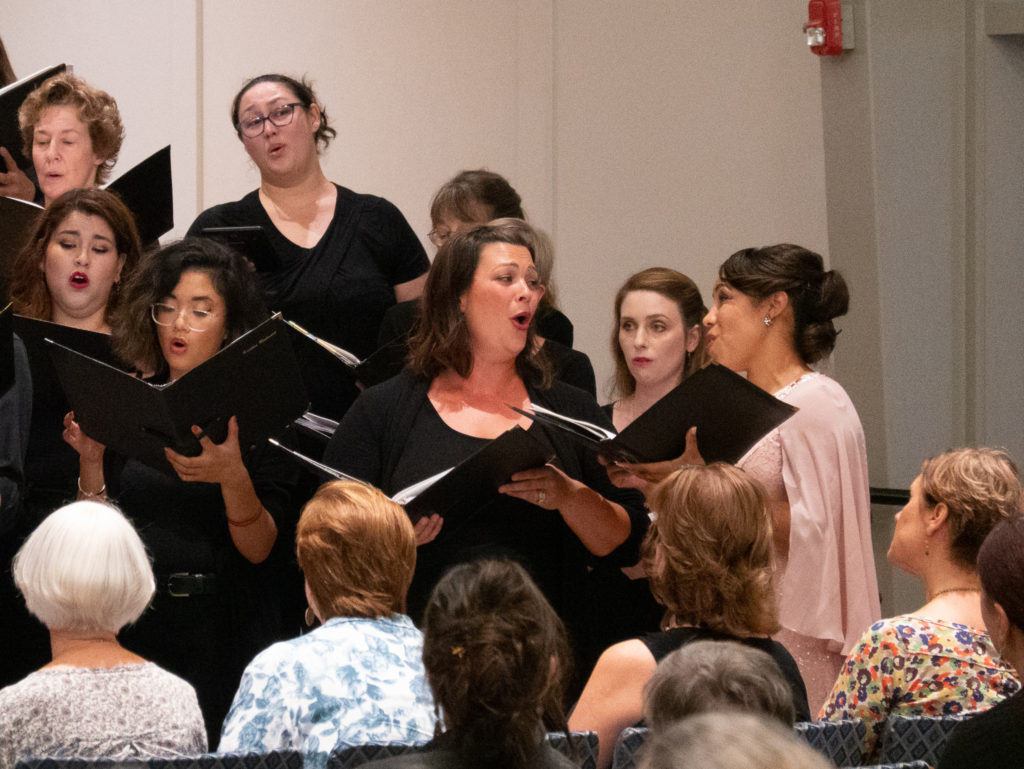 In December 2019 we had another opportunity for collaboration, this time with Bay Bells, the longest-running community handbell ensemble in the San Francisco Bay Area. Kendra Symonds, Resounding Achord alto, also conducts Bay Bells. The result was a wonderful celebration of the holiday season. Click here for more information. 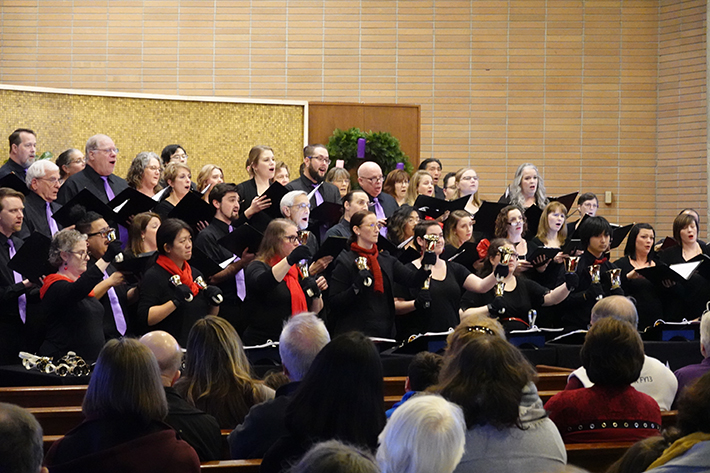 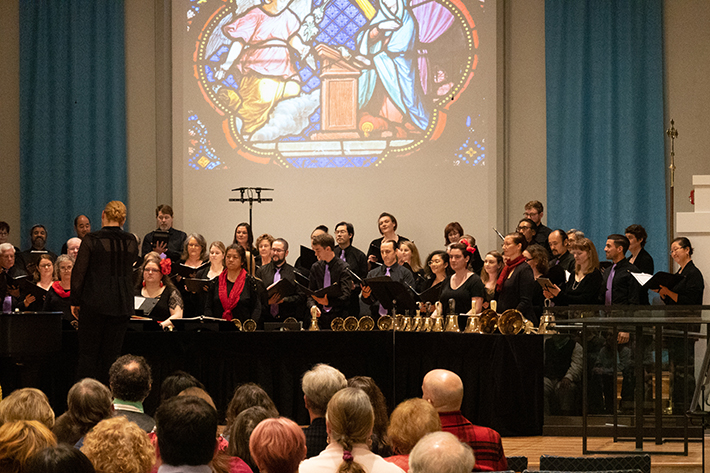 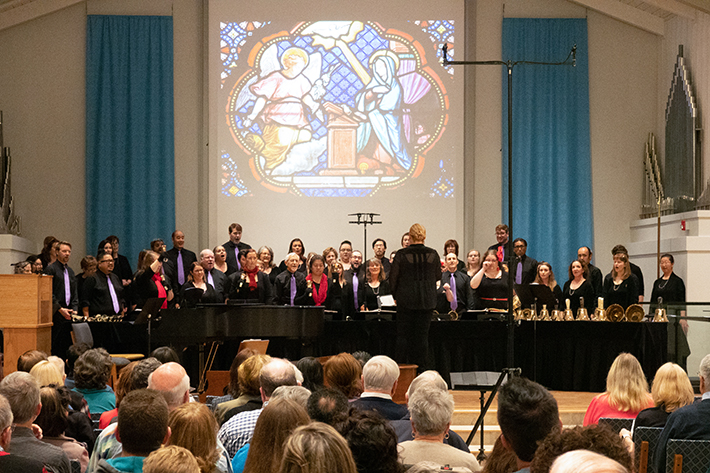 Pure Imagination, held on Leap Day 2020, was a concert with music to celebrate the fun of the extra day this year. The West Valley College Concert Choir, conducted by Lou De La Rosa, was invited to join for the evening, and the choirs combined for one piece, “Banquet Fugue” by John Rutter. The entire program was full of whimsy and humor, and many of our audience regulars claimed it was one of the most fun performances we have ever given.  Click here for more information. 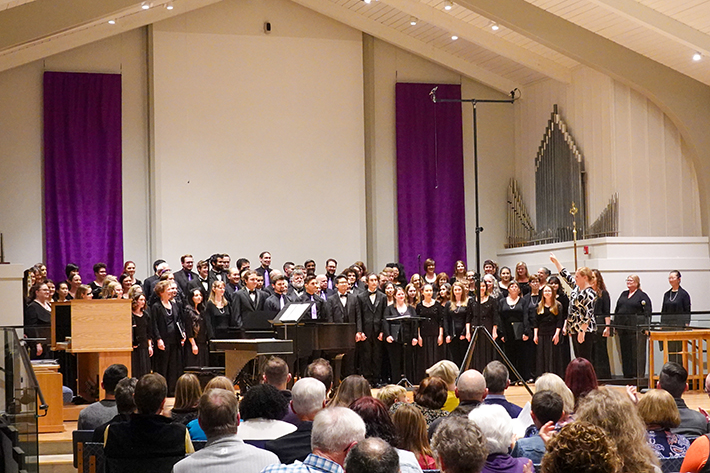 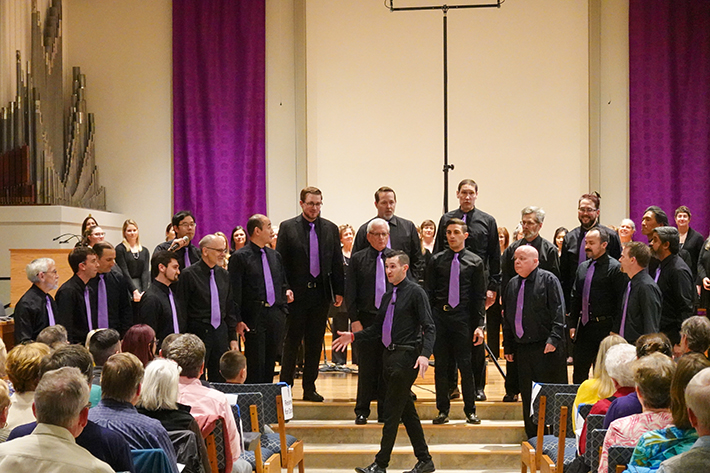 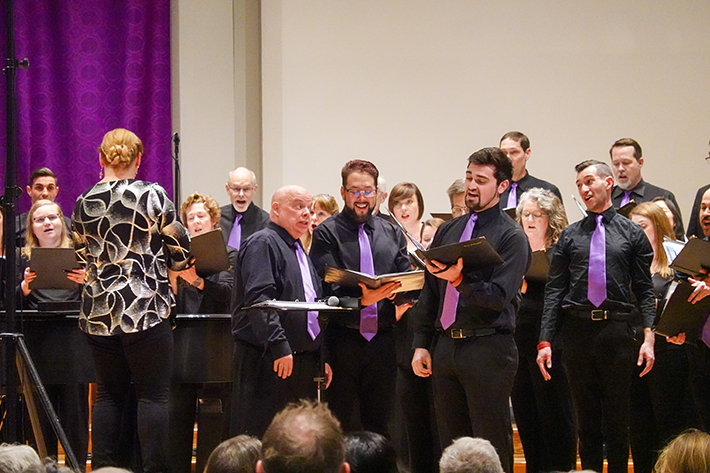 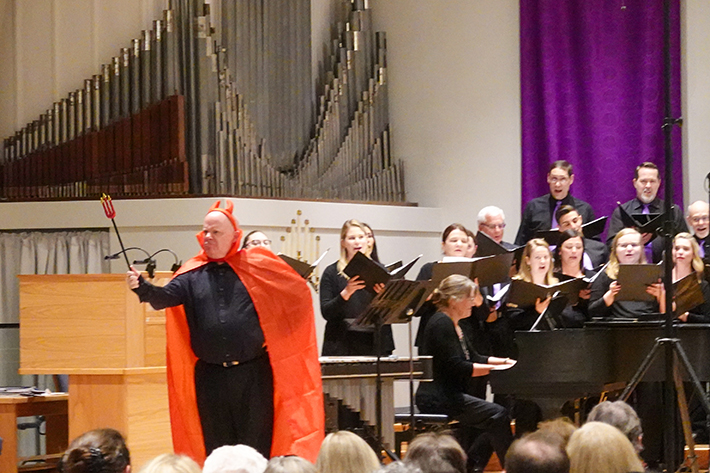 Resounding Achord is honored to participate in St. Francis Episcopal Church’s dedication of its new virtual organ. This dedication comes at the end of a 6-month renovation of the sanctuary, and will be the debut performance in the newly-renovated space. The dedication will be a part of an Evensong service with music by Roland Martin.

Following the service, Resounding Achord will present a reprise of Kim Andre Arnesen’s “Magnificat,” which they performed in December 2017 in Palo Alto. Danielle Wells, soprano, and Michael Burroughs, organist, will also be featured.

This event is free and does not require tickets.

My worlds will collide October 7 at our Resounding Achord’s A Musicale Fundraiser, as I’ve lured my fellow Bear-a-Tones over to St. Francis Episcopal Church to perform a couple of our songs. We’re an a cappella octet that sings American Songbook standards, Four Freshmen arrangements, barbershop, novelty songs, and more.

I won’t be the only one that night who will be revealing what he does musically outside Resounding Achord. I’ll bet more than half the singers in Resounding Achord (RA) consider RA to be their primary performance outlet – but not necessarily their only outlet. Many are in church choirs and others are or have been members of choirs we admire, or they play instruments in bands of various sizes. Some teach music. We even have a rock vocalist or two in our midst.

I was in a rock group myself from 1999 to 2002 and then joined the Bear-A-Tones in 2003. I’ve only recently shed my new-guy status. The Bear-a-Tones trace their roots to 1948, the year the UC Berkeley men’s octet was founded by the same fellow who founded our octet as a South Bay quartet in 1968. Two other Berkeley octet founders eventually contributed songs to the Bear-a-Tones family as the group morphed into an octet in the late 1980s. We admitted a bass who had not sung at Cal, and that later opened the door for me, despite my University of Missouri past, when I was right for a top-tenor position in 2003.

What a great fit. I came aboard already loving the Cal pep songs that also are part of our repertoire of 100 songs or so, and I was eager to sing jazzy arrangements of “Autumn Leaves” and “All the Things You Are” again after too many decades of not being available for such groups.

We meet each Monday at one another’s homes. The current number of Cal alums in the octet is five. Most of us have wives who are involved with the group socially. It’s sort of a gentlemen’s club, whereas RA feels more like graduate school, and frankly RA is more rigorous.

Although the Bear-a-Tones perform three to 10 times a year, including the UC octet reunion each March, and are eager to perform more, those weekly rehearsals are what sustain us. There’s lots of singing, yes, but it’s liberally mixed with quaffing and munching, and talking about our vacations and relatives, current events, and life’s challenges.

I’ll be in the Bear-a-Tones as long as the group and I both exist. Although I am a relatively new RA member, it adds a lot of dimensions to my musical life that would otherwise be missing. I’m lucky to be in these two groups.

Come see the Bear-a-Tones, several talented RA members, and a bunch of amazing high school students on Saturday at A Musicale Fundraiser and support RA’s outreach programs at the same time.

Want to walk into your audition with confidence?

This three-hour workshop is for high school singers who would like extra help with preparing for the regional honor choir auditions, which are held at the end of September.

Kristina Nakagawa leads this afternoon workshop. All students will take home materials that will support further audition preparation at home.

eScrip is the original and one of the largest “electronic scrip” fundraising programs. eScrip has created a system that rewards customer loyalty by contributing a percentage of purchases made by participating families to school or youth based groups. Participating merchants contribute each time your families make a purchase using their registered cards. There are no receipts to collect, no vouchers or certificates to buy, no hassles for you and every purchase counts.

eScrip helps schools and nonprofit organizations earn thousands of dollars for much needed programs and activities. We’ve been making a difference since 1999, with over $420 Million raised for great causes that you care about!

Resounding Achord Productions is registered with eScrip. With the following simple process, you can support us just by making purchases as usual.

You automatically earn money for us when you shop.

This is an example widget to show how the Right sidebar looks by default. You can add custom widgets from the widgets screen in the admin. If custom widgets is added than this will be replaced by those widgets